Forty Acres and a Mule!

“I’ve spent much of my life searching for the stories of the African American peoples; I’ve always wanted to tell their story” Henry Louis Gates

As I watched Episode 3 of “African Americans: Many Rivers to Cross” I was reminded of the Naked Gun movie and the scene where explosions are going off, cars are being demolished and all kinds of havoc are going on when the main character of the movie parts the crowd and deadpans, “move along people there’s nothing to see here.” If you have ancestors that lived in Indian Territory, watching this program would be like the Naked Gun, no reason to watch, just move along, nothing to see…

Having said all of that, there was considerable attention given to the proposition of former slaves owning their own land and an emphasis was placed on the Sea Islands for their farming of the  a special blend of cotton and the fact that these blacks had the opportunity to grow this cotton on their own land.

I find it increasingly difficult to say good things about Dr. Gates and his so called “searching for stories of the African American people.” Episode three dealt with the issue of General Field Order # 15 issued by General William Tecumseh Sherman granting the proverbial forty acres and a mule to the emancipated slaves.

If the producers had taken the time to research the history of “The African American peoples” they would have EASILY discovered thousands of former slaves working land of their own and a treaty that granted these former slaves anywhere from forty to one hundred and sixty acres of land for every man, woman and child that was enslaved or a descendant of a former slave in the Cherokee, Chickasaw, Choctaw, Creek or Seminole Nations.

Following the Civil War the Five Slave Holding Tribes agreed to treaties in 1866 that emancipated their slaves; adopt them into the nation of their last slave owner as a citizen and provide them with land to become self sufficient.For the thousands of African Americans formerly enslaved in Indian Territory, they would have the ability to farm land that “state Negroes” could only dream about.

The idea that a complete and thorough history of “African American peoples” is being presented with this program has been increasingly disappointing. Evidently, the idea of former slaves owning and farming their own land and developing all black towns while facing long odds and southern hostility did not occur for the former slaves of Cherokee, Chickasaw, Choctaw, Creek and Seminole Indians.

I have to ask the question why?

The struggle for civil rights among the Indian Territory freedmen is extensively documented in government record after government record from the Congressional Record to the Supreme Court; again, why is this history being excluded as part of African Americans: Many Rivers to Cross?

If the producers and Professor Gates were dedicated to presenting the “stories of the African American peoples” he most certainly should have been aware of the rich stories about survival, protest and political intrigue that existed in Indian Territory following the Civil War. The Five Slave Holding Tribes fought on the side of the confederacy to protect their institution of chattel slavery.  Yet there was not one word concerning this history and the African Americans in Indian Territory affected by the war and it’s aftermath.

For the record, there is no way Dr. Gates can claim ignorance to this part of “African American history. In another made for television program he produced; Dr. Gates presented the genealogy of actor DonCheadle who is, in fact a Chickasaw Freedmen descendant. During the course of his presentation to Cheadle, Gates was quick to point out the one person who had some connection to Native Americans had no discernible “Indian blood” in his DNA; rightfully so, but to dismiss this history as a vital part of African American history is without a doubt problematic and incomplete.

At this point I have absolutely no confidence the history of African Americans and their descendants who survived slavery among the Cherokee, Chickasaw, Choctaw, Creek and Seminole Indians will be presented in this six part program; African Americans: Many Rivers to Cross. As I look at this last night was a perfect opportunity to present the history of Native Americans involvement in the Civil War and the land acquired by thousands of African Americans because despite General Field Order #15, these were probably the only former slaves that received at least forty acres. How the program missed that is beyond belief.
Mound Bayou was touted as an example of what former slaves could do when allowed to live alone in an all black town providing for their family's. It is remarkable not a word was mentioned about the multitude of "all black towns" in Indian Territory.

When you look at the history of all black towns in Indian Territory and later the state of Oklahoma, you see towns from Bailey to Wybark with many of the citizens there former slaves and their descendants along with former slaves of the United States settling in during reconstruction to establish a place where they could worship, raise a family and provide the necessities of life to survive and prosper. Why there hasn't been any mention of these African Americans is a mystery to me; especially since Professor Gates has prior exposure to this very history. 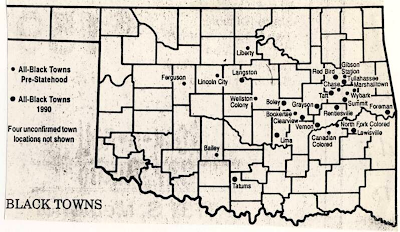 The freedmen of Indian Territory who were enslaved by the Cherokee, Chickasaw, Choctaw, Creek and Seminole Indians rebelled during their enslavement and some found their way to military locations where the Union Army was stationed to volunteer to fight to secure their freedmen as United States Colored Troops. These men came back to the Territory to become some of the leading men in the territory to continue their struggle for equal rights, citizenship and a share of the land that a few short years earlier they had been enslaved.

There were many men who survived the Civil War in one capacity or another when the war was over these former slaves manifested the leadership skills necessary to serve their community during the struggle to equal rights as citizens in the nations of their birth.They became interpreters, lawmen, farmers, and civic leaders their efforts should be recognized as contributions to the history of African Americans.A few of them survived and lived to be allotted land by the Dawes Commission circa 1898-1914.

What does it take to recognize this history of African Americans on the other side of the Mississippi River?

What is the problem with recognizing the history of the African Americans just north of the Red River?

Indian Territory Freedmen and their descendants could borrow a phrase from Harriett Tubman, "Ain't I African American?"

This blog post is part of a collaboration of posts being shared by a group of bloggers who are part of the African American Genealogy Blogging Circle. We are sharing our own personal family stories, as the series air on PBS.