WHO KNEW? RUNAWAY SLAVES FOUND REFUGE WITH THE CHICKASAW PEOPLE 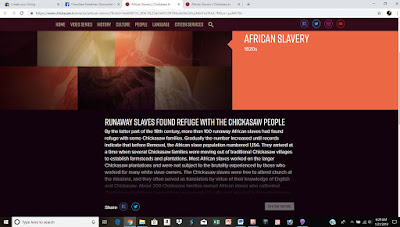 Just when you didn’t think it could get any crazier I wake up to find this on my Facebook page.

I know when my great-great grandmother Margaret Ann WILSON came to Indian Territory; she came as the slave of Col. Benjamin LOVE. I know the LOVE family of slave owners held hundreds of African and African-Native people like Margaret enslaved and they were not runaways and they were just happy to be working on an Indian plantation as opposed to the one she would have been working on in Tuscumbia, Alabama before she made that trip on the trail to Indian Territory.
I know when she gave birth to her children some of them were enslaved prior to having to be emancipated in 1866. If they were runaways from white folks in the south why is it they had to be, HAD TO BE emancipated from enslavement some forty or sixty or ninety years later from a kinder gentler enslaver like those in the LOVE family?

Why is it when Margaret gave birth to one of Col. Benjamin LOVE’S relatives did the Chickasaw Nation deny her the dignity of being recognized as a Chickasaw Indian?

Why is it that the children and descendants of those runaways not welcomed into the nation TODAY and taken in like those so called runaway slaves if the nature of the tribe is to embrace the people that have a shared history and in some cases share blood with them?

The revisionist history of slavery in the Chickasaw Nation that the author of this story is writing is replete with omissions, half-truths and downright mis-characterizations it is curious how this article was ever allowed to see the light of day; and that begs the question, why was it written and for what purpose?

The author(s) are using “statistics” (who knows where they got them) that should be cited if anyone is to take this article seriously.

By the latter part of the 18th century, more than 100 runaway African slaves had found refuge with some Chickasaw families. Gradually the number increased until records indicate that before Removal, the African slave population numbered 1,156.

You mean to tell me there was a population of over one-thousand “African” slaves in the Chickasaw Nation prior to “removal” Perhaps the authors were borrowing a little history from the Seminole Nation to make this statement? And they found “refuge” among the Chickasaw “families?” REALLY?

They arrived at a time when several Chickasaw families were moving out of traditional Chickasaw villages to establish farmsteads and plantations. 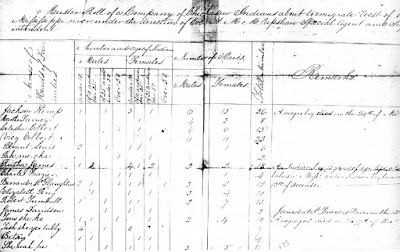 The author of this article would have us believe the runaway slaves happened along JUST IN TIME to help with the transformation of the Chickasaw nation to a more “CIVILIZED” existence as they moved out of their “traditional Chickasaw villages to establish farmsteads and plantations.” Those are some amazing runaways with exceptional timing if you ask me.

Most African slaves worked on the larger Chickasaw plantations and were not subject to the brutality experienced by those who worked for many white slave owners.

Let’s start with the fact that if you looked at the 1860 Arkansas Slave Schedule of Indian Territory you will see a large percentage of SLAVES who were described as M for mulatto. Now they could have been runaway mulatto slaves or they could have been the product of Chickasaw men fathering children by their “grateful” runaway slaves only to enslave their own children, hmmm, I Don’t Think So! That doesn’t give me reason to think things were better as a slave of a Chickasaw than an enslaver in Alabama and Mississippi.

The Chickasaw slaves were free to attend church at the missions, and they often served as translators by virtue of their knowledge of English and Chickasaw.

The idea that slaves were allowed (ALLOWED) to attend church and serve as translators is probably the only truthful and verifiable statement in this article but that doesn’t mean it was good to be the slave; it only means you were being “allowed” to exist in a world that subjugated everything you did and still held you in bondage, not a citizen and not with rights and privileges of citizenship.

This is historical malpractice and a weak attempt at distorting the history of the Chickasaw Nation. They should tell you about the memorial sent to the United States Congress that sought citizenship by adoption by all of these runaways only to be denied because the Chickasaws thought they would be perceived as a "black tribe" if they adopted their former (they ceased to be runaways once in Indian Territory if they ever were runaway) slaves. 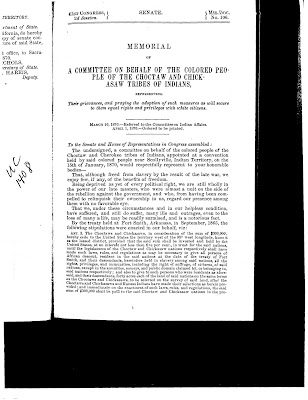 Posted by Terry LIGON at 9:08 AM No comments: Links to this post

Call For Essays-Vignettes of Indian Territory

The working title of the publication is “Vignettes of Indian Territory, Family Histories of African and African-Native People” This involves writing short family stories on an original Dawes enrollee with the inclusion of a photo image of that enrollee.

If you have an image to share of an ancestor who was an original Dawes enrollee I would like your permission to use that image and hopefully encourage you to write a short essay/story of that ancestor consisting of 500 words or less?

For my purposes I need a relatively good image in jpg format submitted no later than February 15, 2019. I would also like to know the Dawes Card number that ancestor is enumerated on so I can access a copy of it to include in the publication.

In addition to the short story and portrait I would need written permission to use the story and images of your ancestor so I can publish your submission. If you have any questions you can contact me at my email address which is also where you send you submission.

Guidelines for submitting a Vignette
estelusti@aol.com

An example of what I'm constructing follows: 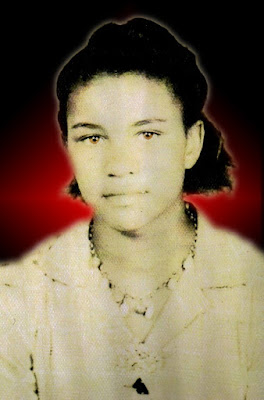 Ardena Darneal-Jones was born March 17th 1897 in Braden, Indian Territory on the on the former slave plantation of John Ring. The Ring Plantation became a sharecropper’s community and township during reconstruction in Indian Territory.

Ardena and her mother, Fannie received their land allotment based on this lineage. They received 80 acres on the Arkansas and Oklahoma border and later sold it and move to nearby Fort Coffee, Oklahoma.
Ardena’s history was very interesting, like a lot of other freedmen of the five tribes; she was the daughter of a blood Indian and a descendant of a slave. Her father Silas Darneal was born in the year 1866 in the Choctaw Nation and died in 1929.  Ardena’s family history indicates her grandfather; James Darneal was the last Sherriff and Executioner for the Choctaw Nation. Ardena’s great Grandfather, Anselon Darneal was a full blood Choctaw that never removed to Indian Territory.
Ardena married Johnnie Jones in the early 1920’s and they had ten children, my mother, Electa was the eldest. Johnnie Jones was a descendant of a black man named William Jones and Roxanna Fillyaw, a mulatto, that migrated to Indian Territory from Bartholomew Township, Lincoln County, Arkansas.
I remember the sweet, kind, generous and caring attributes she possessed. I remember how she maneuvered through the era of “Jim Crow” in Spiro, Oklahoma, easily. Because her father was a blood Indian there was an understanding, among the locals, not to bother her. Based on oral testimonies of some of my older siblings, my grandfather, Johnnie would send Ardena to Spiro to conduct business so he would not have to endure the Jim Crow practices of that era.
Ardena was a house wife all of her married life. She loved and cared for her children. My grandmother made sure they had plenty to eat and she taught them many skills and a work ethic that was has been guided me and my siblings today.

Posted by Terry LIGON at 7:22 AM No comments: Links to this post