A Century of Chickasaw and Choctaw Freedmen History 1840-1940

The Chronicles of Freedmen in Newspaper Articles & Editorials

“They have never been in the reservation stage, through which the other Indians are passing…” 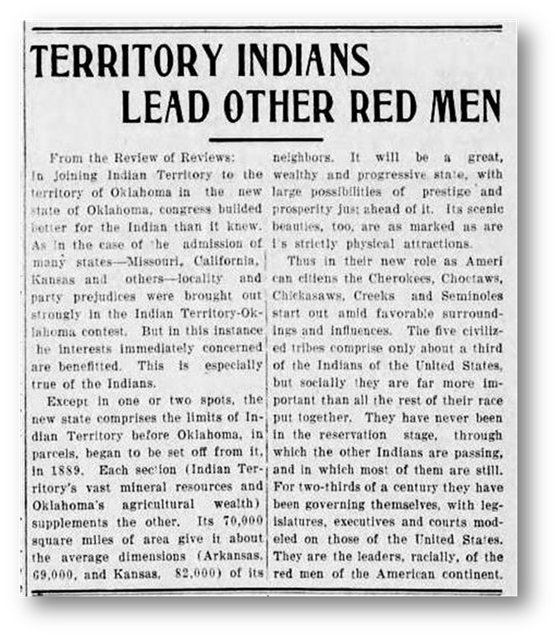 With the Supreme Court's Decision in the McGirt case declaring the Five Slave Holding Tribes are considered to occupy "reservation land" I wonder what the newspaper articles and editorials would have to say today when the Tulsa Democrat in 1906 emphatically stated "they have never been in the reservation stage?"
I don't even know how to address the statement in the article, "The five civilized tribes comprise only about a third of the Indians of the United States but socially they are far more important than all the rest of their race put together."
Is this why the Five Slave Holding Tribes try to keep a low profile as not to attract attention to their "complicated history" of chattel slavery?
"injustice anywhere is a threat to justice everywhere..."

Posted by Terry LIGON at 8:04 AM No comments:

A Picture is Worth 500 Words

When writing the story of your ancestors if you have photographs, old bibles, birth or death certificates these items can be very useful in telling that story. We are by nature and now more than ever influenced by visual images as opposed to the written word. I'm not here to judge but recognize that in order to reach your audience images are powerful in telling the story of your ancestors.

We are fortunate to have the power of computers that allow us to digitize and manipulate images with simple graphic programs which can transform a story that can impact those youhope to have read your story. For some of you who have experience with programs like photoshop you can take the art of image manipulation to another level.

In a previous article written for the Oklahoma Freedmen Collective you can see the use of graphic software and how it can be utilized in illustrating a story about Charles Cohee whowas a leader within the Chickasaw Freedmen community. 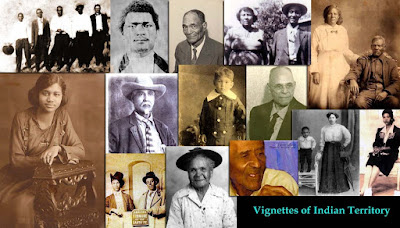 The montage of various original Dawes Land Allotment enrollees was done with contributions from their descendants. It is a powerful statement that gives life to those enrollees and when integrated in their story we help preserve their history and legacy. The power of an image can be instrumental in preserving our history, don't be afraid to work those images into your family's story. 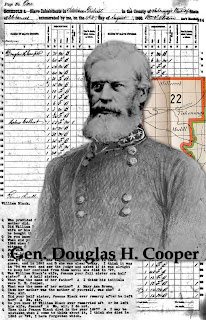 One of the keys to producing images for your story is learning how to layer several images to create a totally new graphic that can be worth more than "500 Words."

It's one thing to see the name of an enslaver on the documentof your ancestor, it's another thing to see that enslaver with other images that illustrate who he was and others he enslaved and where they were enslaved.

I encourage you to experiment with images of your ancestor or historical documents you obtain, they will add impact to the story you tell about your family's history.

Posted by Terry LIGON at 8:48 AM No comments:

In 1968 the issues of police violence became one of the reason for the formation of the Black Panther Party. They came up with a 10 point plan and #7 in that plan was "We Want an Immediate End to Police Brutality and Murder of Black People." 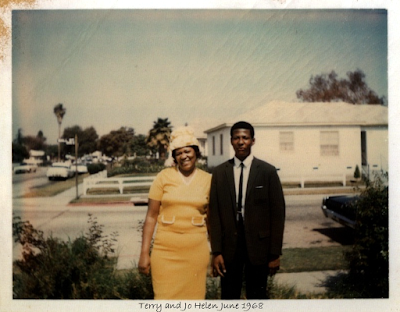 Fifty-two years later ask yourself how much has changed?

In 1968 there was a proposed boycott of the Olympics but only a few people engaged in peaceful protest namely John Carlos and Tommie Smith. There future earnings from their athletic accomplishments were ruin because of their protest. 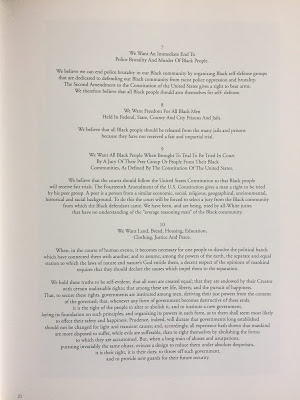 In the summer of the same year I was 15 years old and getting up about 4 in the morning throwing the Los Angeles Times Newspaper so I could earn money to buy clothes when I began high school later that year. We would get up that early so we could put the different sections of the paper in chronological order, roll them up and put rubber bands on them. We probably had a route that consisted of several hundred addresses so we needed a car to make the deliveries.

I forget the name of the guy who had a license to drive legally but my brother and I were sitting on the back of the rear seat of his convertible Rambler, him on the left, me on the right and we had to throw the papers so they would land on the lawn or the porch. By the time the sun came up we would have finished our route and gone home.

One night during that summer I was coming home from Jim Dandy's Chicken with a bag of chicken in my hand, minding my own business. As I turned the corner and began walking down Wall St. about two blocks from home, numerous police cars came from 4 different directions and stopped me; an officer came out of his car with his gun drawn and told me to lay on the ground.

Laying on the ground I looked up to see a young officer in the back seat of the car in front of me shaking with a shotgun pointed at me. Suddenly my friends mother came running out of her house screaming don't shoot that baby, I know him!

Their excuse for stopping me was "a report there was gunfire in the area. “The neighborhood was still a safe place for young people growing up, except for the 77th Precinct that had a reputation for abusing black people they were sworn to "protect and serve." 52 years later, we are still working on Black Panther Parties #7

I have to believe Stanley's mother saved my life that night and I have not forgotten that incident to this day more than fifty years later. I could have been Breonna Taylor, Jacob Blake or George Floyd so all of this stuff hits home with me every time I see an incident.

Yet here we are, 52 years later and the Black Panther Plan #7 still remains unresolved. I don't have the answers but it may be something in their 10 point plan that needs to be tweaked 52 years later so there doesn't have to be a woman risking HER life to save the life of another human who happens to be black?

Teach All of the History

I don't live in Oklahoma so I'm not sure how all of this news coverage is playing there BUT!

It is striking how there is wall to wall news coverage of Oklahoma, Juneteenth and the Tulsa Race Massacre as if these are the only events that have happened in that state and the black people who live/lived there.

Clearly Tulsa was a devastating event of racism gone horribly bad, yet there were incidents that preceded it that were racially motivated and deserve to be told. In a recent interview on a program of "Black Voices for Trump" the former speaker of the House, T.W. Shannon stated that ALL of history should be taught (I'm paraphrasing) and I couldn't agree more.

However in light of the wall to wall coverage of Tulsa so much of "Oklahoma's" History is not being mentioned and more than likely NOT BEING TAUGHT in the school systems there or around the country, isn’t it time to teach all of the history?

I have yet to see/hear anyone in the "mainstream media" mention the fact that prior to statehood, there were enslaved people in what is now the state of Oklahoma.

I have yet to see/hear anyone mentioned those enslaved people were held as chattel slaves by Native Americans.

I have yet to hear that there were numerous "sundown towns" in the state of Oklahoma that made life difficult for black people there.

I have yet to hear anyone from the Native American communities in Oklahoma rally behind the flag of "Black Lives Matter" but black people seem to be willing to defend the rights of Native Americans as long as "the grass grows and the water flows."

Oklahoma's history is replete with racist and violent acts against people of African descent and all we hear about is Tulsa. With all of this wall to wall coverage of Oklahoma not even the former speaker of Oklahoma's legislature has mentioned the first act ratified by the body he oversaw was a Jim Crow act. I agree, we should teach ALL OF THE HISTORY!

Yes! Black folk and Oklahoma got some history and it began way before Tulsa...
Teach All of the History.

The Trail of African Tears

As we near the close of the so called Black History/Heritage Month it is important to note that there is some history and heritage that constantly gets overlooked and ignored during this time of remembrance and celebration. The history of chattel slavery among the so called Five Civilized Tribes barely is mentioned in the mainstream history books and sad to say there appears to be very little acknowledgement of this tragic chapter in Native American history.

It is more frustrating for me is practically everyday someone is voicing concern for the “tragic” story of survival as they tell the story of the “Trail of Tears” when they speak about native atrocities. However it is a constant frustration to see this empathy for the native population especially the nations known as Cherokee, Chickasaw, Choctaw, Creek and Seminole when you see how they engaged in the institution of enslaving people of African and African-Native descent. The story of little boys and girls of their enslaved population is something that is lost to the pages of history.

Over the years I’ve attempted to convey this bit of history when I saw someone post various comments about “Native Americans” specifically one of the aforementioned “Five Slave Holding Tribes” because it perpetuates a story that is not fully and accurately told.

In the examples provided there were more enslaved people on the trail yet they are absent from the story of the Chickasaw Nation's story of "forced migration." Clearly the majority of the tears on that particular trail came from people of African descent who were forced to travel from Mississippi and beyond.

If the records for scholars were not readily available I might be convinced the admiration and support for this specific community was warranted but the record suggest that is an emotion that flies in the face of what the true history of the Chickasaw Indians and their relationship with people of African descent?

In the Chickasaw nation alone there were thousands of people who suffered as enslaved people and they were part of the infamous “Trail of Tears.” But you wouldn’t know it from the many celebrations among the Five Slave Holding Nations as they talk about their struggle of being forced from their homes west of the Mississippi and “removed” to “Indian Territory.”

As that story gets replayed year after year there is no mentioned of the men women and children of African and African-Native descent that made that same journey as enslaved people, why? When the story of the Trail of Tears is told I would hope the story of the Indian Territory Freedmen and their descendants is included in that story.
Posted by Terry LIGON at 12:46 PM No comments: