In my examples I wanted to concentrate on one man; Robert H. LOVE who fathered several children; some became citizens of the Chickasaw Nation as did their children and one was not, she was enrolled as a citizen of the Choctaw Nation despite her protest that she be enrolled as a Chickasaw “by blood” citizen along with all of her children. There is and shouldn’t be any ambiguity about this simple fact yet among the Five Slave Holding Tribes the idea seemed a bit inconvenient “if” it was too be applied to the children of Indian men and African descendant women; the record will bear that out!

The theory that marriage was integral to establishing paternity is as one attorney who argued before the Senate Select Committee on Affairs in Indian Territory; Webster Ballinger, correctly defined this type of thinking as “an abuse of intelligence.” The Dawes Commission though careful to scrutinize people on marriages and lineal descent, seemed to take a “crooked path” when it came to establishing African-Native ancestry.

In my next example we are confronted with another refutation of the idea that marriage was the path to citizenship in the application of Joe N. LOVE Chickasaw by blood card # 1717. His path to citizenship is not unlike those children of Chickasaw men and African descendant women, except in one crucial aspect……….he was enrolled as a citizen!


Some might say that it is the exception to the rule but even if that were true, it sets a precedent that tears at the fiction that a “legal marriage” was the law that determined “citizenship” and “race!”

African-Native people of Indian Territory were not “equally protected” by laws that were designed to circumvent their rights, IF they could get an attorney to represent them in these complex legal matters! Clearly the laws and procedures established by the Dawes Commission and the Five Slave Holding Tribes were designed to suppress information that established their ancestry based on the laws already on the books.

In our next example Joe N. LOVE states in a letter to the Dawes Commission that he is an “illegitimate” child of Robert H. LOVE a deceased Chickasaw Indian and his mother was a non-citizen “white” woman. Despite all of this and let me reiterate he was illegitimate, by definition there was no “legal” marriage and still, he was granted citizenship and his full rights AND land allotment because of his Indian father. 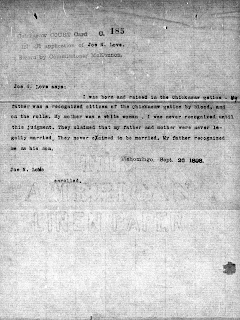 The infamous Choctaw and Chickasaw Citizenship Court, the legal body in the Nation setup with deal to have legislation enacted that would deliberately bar freedmen from being transferred to the blood rolls was the legal entity that violated the supposed law that allowed only children of “legal” marriages to become citizens in the nation.

When you look even closer at the documents and the actions of the Dawes Commission which was supported by the tribes an unmitigated fraud was visited upon thousands of men, women and children who were denied the protection of a legal system that failed them miserably.

The only tribe that created a list of “intermarried whites” was the Cherokee tribe. Yet the four mother tribes, Cherokee, Chickasaw, Choctaw, and Creek all engaged in the miraculous transformation of turning white people into Indians by blood by simply including “Intermarried Whites” on the “Citizen by blood Rolls.”

This fiction that marriage was the legal process to determine paternity was already refuted by the laws on the books at the time and I will attempt to cover certain aspects of that in a future post.