Continuing with the thought that the “concept of race” was integral to the eventual process of determining citizenship in the Five Slave Holding Tribes of Southeastern Indians known as the Cherokee, Chickasaw, Choctaw, Creek (Muskogee) and Seminole tribes I thought it would be illustrative to used children born of the same father but different mothers and allow it to show how race played a part in how each would gain citizenship in the nation of their father’s birth.

The first child was named Thomas B. LOVE the son of Sally LOVE (deceased) and considered a Chickasaw. His father was also deceased and named Robert H. LOVE and known to be “one half” Chickasaw by blood. Thomas and his family appear on the Chickasaw (blood) card number 580

What becomes remarkable and interesting about Thomas and his family is the treatment of his wife and children and their status as Chickasaw Indians. His wife is clearly identified racially as white but she is listed in the “citizenship” records as an “intermarried white” and on the same “Chickasaw blood roll” as her husband and children.

When you look at the record (M1301) of the oral interview jacket on this family the bulk of the information deals with the issue of citizenship for Mary LOVE who admittedly was not born in Indian Territory, her parents where not born in Indian Territory and apparently Mary HUDDLESTON arrived in Indian Territory at the age of 18 or 19 and married Thomas LOVE. There was very little information for Thomas other than he appeared on a roll of citizens (presumably based on his father and/or mother being a citizen of the Chickasaw nation, but there was no actual documentation included in the file to support his citizenship other than a cursory interview.

Through this marriage Mary would subsequently be placed on the Chickasaw “Citizen by blood” roll and not have a single drop of Chickasaw blood in her veins unlike Thomas’ “half sister” Bettie LIGON and approximately two thousand other similarly situated individuals. 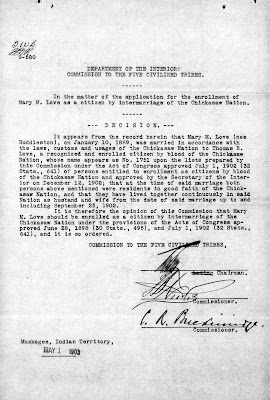 This is an image of page 10, of the Interview Jacket for Thomas LOVE Chickasaw by Blood # 580.
His wife is enrolled as a “citizen” by “intermarriage” and should have been placed on the I.W. roll, but you will note her name appears as the spouse of Thomas on the Blood roll, just another example of how white’s became Indian with the stroke of a pen.

It was also the means by which her children could be considered “Chickasaw Indian” not because of their mother but based on their father’s status as an Chickasaw Indian.

This is said to be the culture of the Chickasaw Indians but it says a great deal more about how race and politics collided to embrace the children of white women and excluded the children of black women when it came to citizenship in the Chickasaw Nation and throughout the Five Slave Holding Tribes.

It is a specious argument about genealogy when you validate a person’s identity based on “marriage” as opposed to paternity and maternity. When the Dawes Commission was mandated to “construct a correct roll” of Indians by blood, Intermarried Whites and Freedmen, the inclusion of Mary HUDDLESTON on the blood rolls was in direct contradiction to their mandate.

We will explore how the concept of "illegitimacy" play a role in raced based biases in the Five Slave Holding Tribes in our next installment.
Posted by Terry LIGON at 3:12 AM