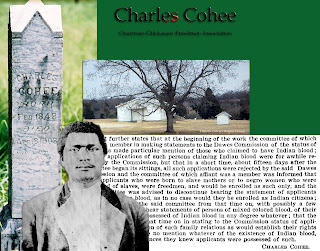 During the investigation testimony was taken from many of the people involved with the enrollment process but one person in particular gave damaging testimony to the practice of racial identification practiced by the Dawes Commission that was detrimental to the future land wealth of thousands of people of African-Native American descent.

Charles Cohee gave testimony to the method of forcing people who were multi-racial from the tent that received testimony on their Indian ancestry and forced them to enroll as a freedmen.

What was maddening about this procedure is the deliberate act of denying for ages thousands of individuals who had possibly more Indian blood than people who were enrolled as Choctaw and Chickasaw "by blood." This act also deprived these thousands of men, women and children 320 acres of land they were rightfully entitled too.

The one overriding reason for denying these people their birth rights as "Choctaw and Chickasaw Indians" was there mother was of African descent.