Bettie’s List is a phrase I credit as a creation of Dr. Jesse Schreier; in his dissertation “Different Shades of Freedom: Indians, African Americans and Race in the Choctaw Nation.”
The basis of Bettie’s List is the approximately two thousand men, women and children who sought to be classified as Choctaw or Chickasaw “Citizens by Blood” when the Dawes Commission began the process of creating the rolls that would determine whether someone was an Indian of either nation.
It was also the measurement by which an individual would receive the equivalent of three hundred and twenty acres of land as an Indian or forty acres if that individual was determined to be a “freedman;” the descendant of a former slave.
There has not been a great deal of scholarship on this subject among the Choctaw and Chickasaw Nations and yet, the events that occurred in 1898-1907 that saw thousands of people who had at least one ancestor considered to be an “Indian.” Today the reason descendants of these African-Native Americans are not citizens of the Choctaw or Chickasaw Nation is based solely on the construction that if your mother was a slave or of African descent, than the child would be considered of African descent ONLY!
To read more about Bettie's List and Equity Case 7071; I will be posting additional commentary and documentation at:
http://estelusti.com/bettie's%20list.html

An Old Negro Settlement on the Edge of Indian Territory...

While reading the article about “An Old Negro Settlement on the Edge of Indian Territory” at first I was impressed with the use of digital technology in presenting this unique history. Subsequently I read a comment concerning the same article that piqued my interest about the settlement and the people who resided there even more.
http://african-nativeamerican.blogspot.com/2010/08/story-of-old-negro-settlement-on-edge.html

However I’m open to there being another possibility on who these people were in the “Old Negro Settlement” but it occurs to me that there may be some methodology that can be utilized to determine the who constituted this particular population that according to the maps over the years and presented in Angela Walton Raji’s wonderful article resided along the banks of the Canadian River in Oklahoma Territory right across the river from the town of Purcell, Indian Territory. 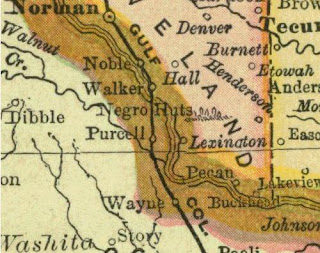 Clearly, the area was located across the river and just north ofPurcell; Indian Territory meaning this small slice of land was located in Oklahoma Territory. There was another matter that caught my attention; the map maker noted the settlements and towns with little open circles to denote the location. The maps interchangeably used the name of Negro Settlement or Negro Huts but in no case could I definitively say there was that little circle noting that it was considered a permanent locality like Norman, Walker or Purcell. 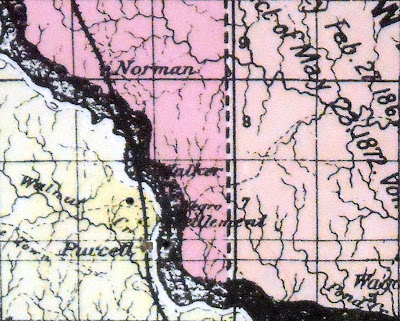 I figured to test my theory I need something else that might help me pin down where exactly this settlement of Negroes was located and it suddenly hit me part of that answer was right there on the map.

If you look closely you can see numbers in a vertical column that get progressively larger as you go up or North on the map. My map depicts the “Twin Territories” of Oklahoma and Indian Territory in 1890. It is located on the wall in my “research room” at home and I look at it every time I go in to work on my research, blog or website. I also use the map to place push pins in the areas where freedmen lived to get a visual sense of where their populations resided and migrated in Indian Territory. And wouldn’t you know it also included this little settlement along the Canadian River known as the “Negro Settlement.” 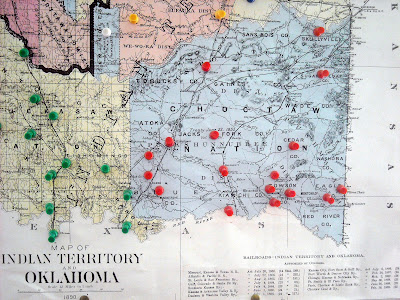 Now the wheels were really turning in my head as I looked at this map that illustrated the “Township and Range” which could be very useful in determining where this settlement was and with a little luck, we might find out the people who resided in the area in the 1900 census records.

In a book I have that was recommended as a genealogist mush have; “Land and Property Research, in the United States by E. Wade Hone” it describes the term “township as a six mile square piece of land within the meridian. Ranges are imaginary lines running north-south; set six miles apart-the width of a township.”

If you have done any census work in Indian Territory and the state of Oklahoma you recognize that in many cases, the census utilized Township and Range descriptions for the enumeration district instead of a town name. This was the information I thought would help locate this settlement and the people who resided there and possibly provide information that demonstrate if they were Chickasaw Freedmen. 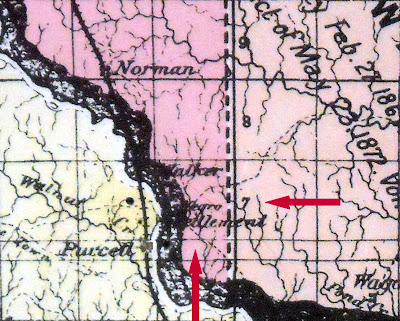 Now with the knowledge that Walker Negro Settlement is located in Township 7, Range 1 West all I needed to do now is locate township and range in a census description and look for the black people enumerated there.

I looked through the 1890 “First Oklahoma Territorial Census” and the 1900 United States Census and as you might (or as I should have expected) the description of Township 7, Range 1 West did not provide positive results on what I was looking for.

The same result occurred when I looked through the 1900 census records of Cleveland County in which the area of Township 7, Range 1 West is located.

In the maps provided it “appears” the settlement is moving and changing names constantly. Having two decades of recognition on territorial maps one would feel reasonably certain that if the population was sizable enough to be named on a map, census enumerators could have found their way to the area and enumerate the population, especially when it appears the adjacent areas were being enumerated? 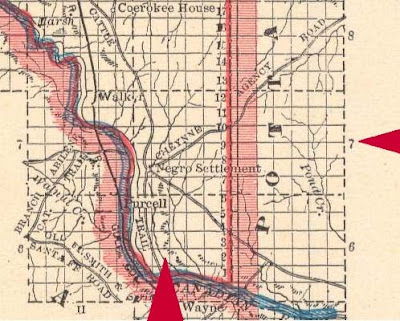 We might also conclude from the maps that in some circumstances the name Walker is detached from the settlement and on other maps it appears that it is one community named Walker Negro Settlements or Negro Huts.
It is in a later map that the two areas seem to be joined in 1893; with the location of “Negro Settlement now closer to the border of Township 8, Range 2 West.

Taking all of this information into consideration I directed my search on the two areas that would possibly meet these coordinates; (Township 7, Range 1&2 West and Township 8, Ranges 1& 2 West) with hopes they would yield some positive results. 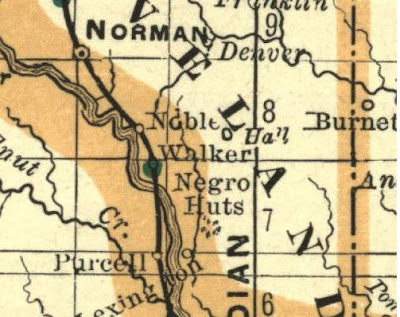 Clearly Township 7, Range 1 & 2 West was located in the Lexington Enumeration District of Cleveland County in the 1890 “First Oklahoma Territorial Census” and the 1900 United States Oklahoma Territory Census.
One could question if in fact the settlement was in Township 8, Range 2 and does the census record corroborate this?
What the census records reflect is this population if it was an actual black community sandwiched between Lexington and Walker was probably transient or overlooked in both the 1890 Oklahoma First Territorial Census and the 1900 Oklahoma Territory census. The only sizable population of blacks in Oklahoma Territory was located in an area that is not reflected by the maps in the enumeration district known as Little River; (Township 9, Range 1 East) in 1900. 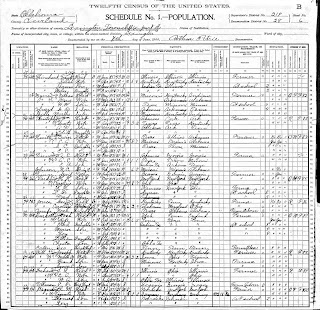 In the census district that comprises Township 7, Range 1 West (Lexington) the records don’t reflect a sizable black population as you would expect by looking at the maps. In this enumeration district the majority of people listed were noted as white. However there appears to be one more aspect to this research that must be mentioned.

One of the other enumeration districts in 1900 was Case in Cleveland County; it was the only other area other than Little River where a sizable population of blacks resided. The only issue with Case was there was no township and range information readily available. The other aspect about Case was the manner in which they described “blacks” in the area. They were noted with a “C” presumably for “Colored” in contradiction to the special instructions that were provided the 1890 enumerators on how to label the various “races” and nationalities. The existence of these "Special Instructions" also informs us that if there was a population of "Negroes" in the area, they would have been enumerated and more than likely placed on the census form as "B" for black. 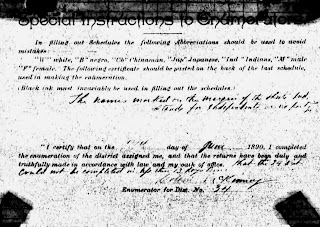 With all of this information on this area and census records, we can come to some conclusions on this population with some certainty, it did not consist of Chickasaw Freedmen who were forced out of the Nation and until information surfaces to the contrary the only populations of blacks living near the area consisted of what has been described as “State Negroes.” The one place that could give us some additional clues on who resided in the area would be the nearby town in the Chickasaw Nation called Purcell...
Posted by Terry LIGON at 5:36 PM 4 comments: Links to this post 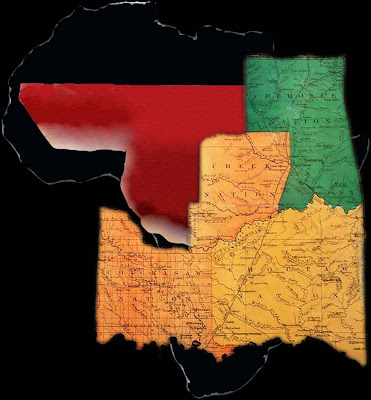 ©
Posted by Terry LIGON at 10:30 AM No comments: Links to this post 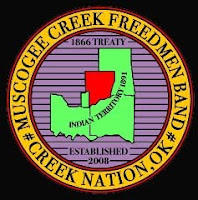 
Muscogee Creek Indian Freedmen Band announces the premiere of the riveting film, “Bloodlines”, Saturday, September 25, 2010 at 6:30 p.m. at the Reed Center in Midwest City, Ok. “Bloodlines” is independently produced and directed by Camara and Chantel Rose of Get Focused films.
“Bloodlines” tells the story of a group of people who were suddenly removed from their tribe in 1979. Told that because their ancestors were merely freedmen, they were involuntarily dismissed from their Nation, a culture that they grew up in loved and embraced. For the past thirty-one years, descendents of African Creek Native Americans have desired to be acknowledged as members of the Creek Nation, a sovereign tribe within the United States. They have connected their bloodlines to ancestors who were tribal leaders, chiefs and prominent community members.
Possessing a rich and painful history many of them only desire to be a part of the community that their ancestors played a prominent role in developing. Under article 2 of the Treaty of 1866 signed between the United States government and the Creek Nation, they were to be granted, “all the rights and privileges of native citizens”. Armed with records and documents proving that they have a direct lineage to full blooded Creeks, and the bloodlines of their ancestors flowing through their veins, these descendents are set on a mission to be acknowledged for who they are.
The Documentary premiere gala raises scholarship funds for students of African Native American decent attending an accredited college or university. Scholarship application and criteria is available at www.1866creekfreedmen.com.
Admission to the Black Tie premiere is $45.00 per person. The event will begin at 5:30p.m, with a meet and greet the producers, and silent auction. Dinner and the premiere of “Bloodlines” will begin at 6:30p.m. Live music provided by Johann Kimbro and ensemble of Shortt Dogg Band. Limited booth space is avail for $75.00.

For more information about the documentary premiere of Bloodlines and, the scholarship fundraiser gala, contact Rhonda Grayson at 405-514-3518 or Sharon Scott at 405-204-0023. Tax-deductible tickets can be purchased on line at
http://www.1866creekfreedmen.com/.
Posted by Terry LIGON at 4:05 AM No comments: Links to this post

This video was created to recognize my uncle Clayton and the letters he sent home to his mother back in Oklahoma. He shared his experiences as a young man in the Navy and later working on a railroad as a cook.

His journeys allowed him to travel and view the world differently from what he knew growing up in segregated Oklahoma. My father used to tell me how much he looked up to his older brother Clayton and when my cousin Clayton who was named after him shared these letters with me, I knew why he was such an inspiration to my father.

I hope you enjoy the video.


Posted by Terry LIGON at 11:32 AM No comments: Links to this post