Word Up Wednesday~African Tears on the Trail of Chickasaw Indians


The typical story about the "Trail of Tears" speaks to the horrors of uprooting "Native Americans" from their homes in the Southeast of the United States. The story that rarely gets told is the tears shed by people of African descent who were enslaved within these same tribes of "Native Americans."

﻿
﻿
The images presented are from the vast files of microfilm stored at the National Archives repository in San Bruno, California. What is striking about the first image is the note that everyone on it EXCEPT the SLAVES were "emigrating" to Indian Territory, now the state of Oklahoma, were actually doing so without the aid of the United States government.

Without a doubt there were probably obstacles to their travel it does beg the question of just how hard it was when they brought numerous slaves with them?
There is little doubt that many in the tribe suffered through the removal period even those who did so on their own. However, it appears tribal historians continue to engage in a revision of their history. By omitting the fact the Chickasaw, Cherokee, Creek, Choctaw brought with them chattel slaves they continue to pander to the public about their oppression while never admitting their oppression of blacks.

If you paid attention to the historian in the video she made a point about how hard the "Trail of Tears" had been on the "tribe." She also made a point the installation was done specifically to solicit empathy from visitors who would view the exhibit. Yet again, it is important to put this history in it's proper context. There were slaves on that trail that shed tears based on their bondage.

Their families suffered as much if not more than those who "forcibly" brought them west as slaves. Perhaps visitors to this "cultural center" will be exposed to all the history of the Chickasaw tribe and their infamous "Trail of Tears."

﻿
﻿ Quite frankly, I don't believe the Five Slave Holding Tribes will ever come clean on their history of chattel slavery. The historian in the video provides the basic rationale why they don't include this chapter when they speak of their history and culture. To "solicit" empathy for "The Trail of Tears" and telling the story of their involvment with chatle slavery is counter to that purpose. 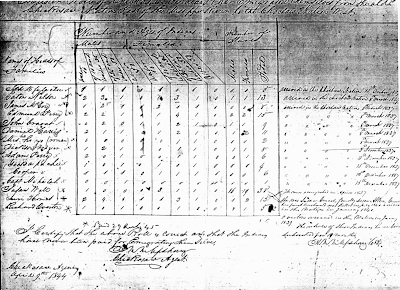 Posted by Terry LIGON at 9:32 AM No comments: Links to this post

It’s What You Don’t See That Matters

In my previous post I wrote about the Indian Pioneer papers as a source for learning about slavery among Native Americans. My initial purpose for looking at these documents was in pursuit of information on people who claimed to have a parent or ancestor listed as a by blood Choctaw or Chickasaw Indian.
﻿Researching the people who sought a transfer from the Choctaw and Chickasaw Freedmen rolls to the rolls of “Citizens by blood” continues to fascinate me. I’ve spent many years looking for documents that were produced to support their position as Choctaw and Chickasaw citizens by blood. Something that continually surfaces as an issue in these cases is the lack of information contained in the Dawes records of freedmen seeking a transfer to the “citizen by blood roll.”
﻿ ﻿
﻿
﻿﻿ ﻿﻿

The commissioners and the tribes used the matrilineal system that determined clan and utilized it to determine "race." A child with a female ancestor who was enslaved or of African descent was placed on the freedmen roll. Their justification was based on the antebellum practice of determining race by the mother.
Despite the practice, and the high level of "Indian" men fathering children by slaves, it did not negate the fact these people possessed Choctaw and Chickasaw blood.

The 1860 Arkansas Slave Schedule gives a glimpse of how much miscegenation occurred on Choctaw and Chickasaw plantations.If you look at the Slave Schedules you will begin to see just how pervasive "intermixing" occurred in Indian Territory. It becomes a matter of "what you don't see that matters," and for the Dawes Commission race mattered.


The Dawes Jacket for Jordan Folsom and his "half" brother Mose contains more evidence that "it's what you don't see that matters" when it comes to the preventing legitimate claims of Choctaw and Chickasaw ancestry. Two pages in Jordan Folsom's jacket are significant for illustrating just how the Dawes Commission omitted evidence to prove his claim of being part Choctaw. The first is his oral testimony given in 1899; at the time of his enrollment. 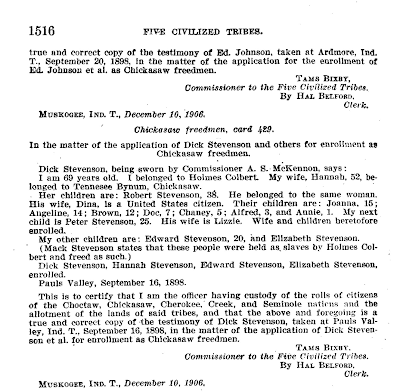 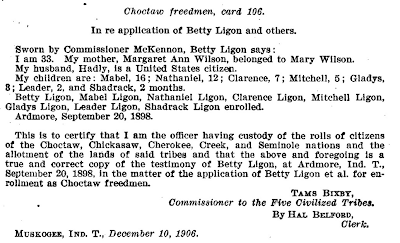 ﻿﻿﻿﻿﻿﻿﻿﻿﻿﻿﻿﻿ These are just a few examples of “What You Don't See That Matters" when the Dawes Commission chose to classify thousands of men and women as freedmen when they had a claim of Choctaw or Chickasaw blood.


The Dawes Commission and tribal official’s prevention of legitimate claims to Choctaw and Chickasaw ancestry has left a legacy of misinformation that should be addressed by tribal and governmental officials today.


The descendants of Dick Stevenson, Calvin Humdy, Caldonia Newberry, Jennie Davidson, Ed Johnson, Bettie Ligon and others have never had their right to due process based on the record that you see and the one you don’t see.

Researching history of the Five Slave Holding Tribes is difficult regarding accounts of slavery. However through careful examination occasionally you can piece together some information by examining oral interviews. One source for this type of interview is contained in the Indian Pioneer Papers.


http://digital.libraries.ou.edu/whc/pioneer/
When you consider all of the information about the Five Slaveholding Tribes known as Cherokee, Chickasaw, Choctaw, Creek (Muscogee) and Seminole, their involvement in African chattel slavery rarely gets written about in our history books. This history is rarely mentioned when tribal historians tell of their past?

I first came across the name of Jordan Folsom when I was performing research into freedmen who sought a transfer from the freedman roll to the Choctaw by blood roll.

In the interview of Jordan Folsom Jr., a Choctaw Freedmen we get a glimpse of slavery in the Choctaw Nation by way of Jordan’s father, mother and grandmother.

Contained in these sentences a lot of information is being given about the family of Jordan Folsom. His grandmother, Sylvia brought two children with her to Indian Territory; they were all slaves. One of her son’s died along the route to Indian Territory with the Choctaw’s.


This is a story that clearly illustrates how much has been missing from Native American history. When the story of tragedy is told regarding the infamous “Trail of Tears,” we seldom, if ever hear the story of those tears shed by the African and African-Native slaves who lived among them.

Jordan Folsom Jr. provides information on his mother Amelia who was also a slave of Dr. Henry Folsom.  Clearly her story became a part of the family oral history. Jordan had been told Amelia was born a slave on Dr. Henry Folsom’s plantation; “in the slave quarters.”

﻿Amelia (Pamelia) Radford provided Jordan with the names of both her parents, Abe and Elizabeth. This oral history could provide valuable information when I compile the data on what was the basis for the Folsom’s claim to Choctaw blood.

Again the importance of this interview is shown by two statements. First, it establishes that at least one of Jordan’s ancestor’s was born in Indian Territory as a slave in the Choctaw Nation. The second significant aspect of this passage is the revelation that Elizabeth and Amelia were both buried in Doaksville Cemetery! Clearly the next question becomes; where is this cemetery? Has it been enumerated and who else is buried there?

﻿
Remember, this information illustrates life on a plantation owned by a Choctaw Indian who clearly does not fit the stereotype of “Native American.” He was a well educated man, who practiced medicine and was a surgeon according to Jordan Folsom. It is only natural to examine what type of “plantation” Dr. Folsom owned; which would give us an idea of how many slaves he held in bondage?


One record that sheds light on this man and his wealth is the 1860 Arkansas Slave Schedule for Towson County, Indian Territory. Dr. Folsom would have been considered a very wealthy man prior to the Civil War. The record illustrates he held in bondage approximately fifty humans as slaves. Beginning on page 9 of the slave schedule and continuing to page 10 we see all of the enslaved people enumerated on Dr. Folsom’s plantation. 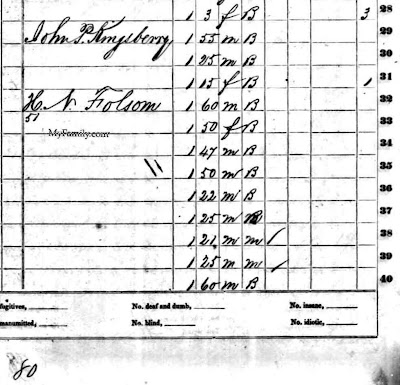 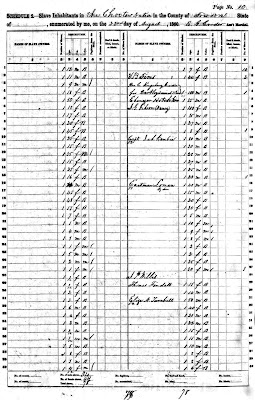 It is important that the whole story of Indian Territory be told and part of that story is the institution of slavery among the so called Five Civilized Tribes. Many historians and the tribes themselves fail to adequately write or discuss this tragic chapter.
Over the years I observed how the Five Slave Holding Tribes promote their history and culture. In the majority of instances they do so by leaving out decades that included the brutal and uncivilized institution of chattel slavery.
For many in the tribes it would appear this history is insignificant. Tragically very few voices have emerged over the years to address the legacy of enslaving African and African-Native Descendant people. I’m sure, this won’t be my last reminder; but it is hoped that this excerpt from the interview of Jordan Folsom Jr. will shed more light on the subject and encourage discussion on the topic. 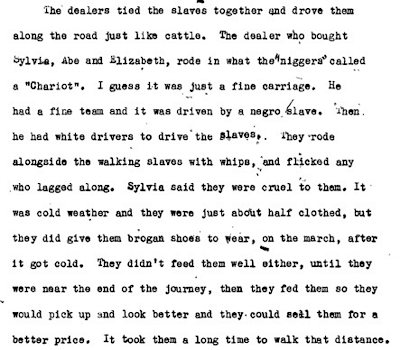