Confederate General and his Negro-Indian Daughter

During the course of my research on “Community, Culture & Identity” I came across a story that was another eye opener. I have become accustomed to “men of privilege” in the Five Slave Holding Tribes having children by slave or Indian women. It appears Douglas Hancock COOPER was no exception.
﻿

The “Chronicles of Oklahoma” give a glowing account of this man’s exploits as a Mississippi politician prior to the Civil War. They share his experiences as the Indian Agent for the Choctaw Nation, yet buried in an obscure record of a "Negro-Indian" woman is the testimony that Douglas H. COOPER, Indian Agent, Confederate General of the Choctaw and Chickasaw Mounted Rifles, is her father!
http://digital.library.okstate.edu/encyclopedia/entries/C/CO051.html
﻿ ﻿﻿﻿﻿﻿﻿﻿﻿﻿﻿﻿

The complexities of this story are on par with all the others I’ve been chronicling but this story took an unusual twist that brings up tons of questions on the effects of the racial caste system among the so called Five Civilized Tribes. It illustrates how race politics can be detrimental to an individuals mental health. Joanna BLACK nee COOPER is one who suffered in this system and my guess it had everything to do with her inability to deal with “identity” issues in her community of Choctaw Indians.
Here is a woman born around the end of the Civil War in 1865 fathered by a man who was and became influential in the politics of the Choctaw Nation. She was also the daughter of a “Negro-Indian” Mary A. BROWN nee THOMAS who may have had similar problems but was better equipped to deal with them than her daughter. The story of Joanna COOPER that deserves to be told!
﻿

There isn’t much in the records that indicate COOPER had anything to do with Joanna. The only children attributed to him are the seven he fathered with his wife Frances Martha COLLINS. Under what circumstances Douglas COOPER met Mary THOMAS-BROWN and fathered her child is not a part of the story in the “Chronicles of Oklahoma but so many stories of miscegenation during this period rarely get told. 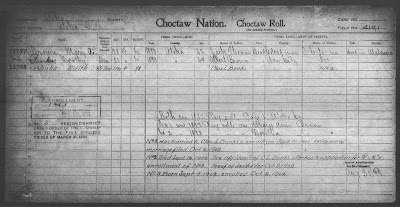 If this were not enough, this story becomes tragic for Joanna and I suspect her children. Joanna marries a “white man” by the name of William BLACK (I can’t make this stuff up folks.) From all indications he was not a responsible man and did little to support his family.

It became clear to Joanna’s family that she was no longer able to take care of her children. William BLACK was not making an effort to support Joanna or their children. It was the testimony of Joanna’s sister Ida BANKS and her daughter Maggie E. BUTLER that provided the portrait of a woman who succumbed to the pressures of life in the territory, possibly conflicted with the need to provide for her children and burden by the issues of identity that may have caused her to lose her sanity.
﻿﻿
﻿﻿

Tragically we don’t know if Joanna's mental illness was caused by not having a relationship with her father Douglas H. COOPER. We don't know if her illness was the cause of being abandoned by her husband William BLACK. Clearly, when BLACK left her and the children, Joanna’s mental stability left as well.
It would be interesting to know about this family and any descendants who survived such a tragic episode. In my opinion it also serves as an example of how many people of African-Native descent fought with the idea of where they fit in that society.
Certainly more people survived the dilemma of being part this and part that but even today we see some traces of people struggling with identity issues if they have a family history tied to the Five Slave Holding Tribes.
I'm sure there is a lesson here somewhere?
﻿
Posted by Terry LIGON at 10:10 AM