When I began conducting my genealogical research I always enjoyed the larger story of Indian Territory Freedmen. It was clear my ancestor's both paternal and maternal included a number of individuals and families that had to be researched and documented. However it was always the larger story of the freedmen that kept me intrigued and curious.

With the idea that if I studied and researched the story of Choctaw and Chickasaw Freedmen in general, the story of my complex family ties would emerge. Once again I've been rewarded for following that path!!!

Over the past two or three months I've put an emphasis on copying EVERY Choctaw and Chickasaw Freedmen Dawes card, oral testimony, including the freedmen minor and newborn cards and jackets. I'm still in the final processes of completing this task but so far I have been able to copy everything but the Chickasaw Minor jackets. In fact, I am paying my son to copy all of the Choctaw Minor cards as we speak!


One of the main reasons I'm doing this is because of my interest in Equity Case 7071. I've written about the lawsuit in this blog so I won't go into the story here. At one point I had the insane idea to digitize all of the records and make them available for others who did not have the time or money to travel to a National Archives facility to conduct research......What was I thinking?

Okay, somebody stole my idea but I'm grateful for them providing this information so I can still conduct research in the comfort of my home; HALLELUJAH!!!

Alright, back to the story! Well I've been culling through the Dawes cards and carefully began constructing a database with the card and associated interviews for the approximately two thousand complainants of Equity Case 7071. I've been constructing this database individuals that can be a research aid for other researchers. I won't bore you with the tedious nature of this project but I plan to have it completed before the end of the year to coincide with the anniversary of the case going before the United States Supreme Court in 1911.

As I was looking at one of the cards, some familiar information caught my attention. On the rear of Chickasaw Freedmen card # 370, Litha PRICE, her parents were listed as Cornelius ALEXANDER and Margaret A. CRINER. Any other time this might not have caught my attention. 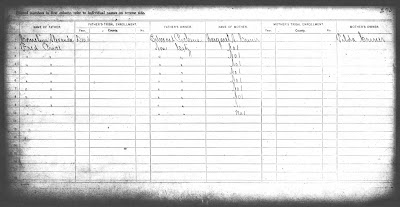 Litha's parents appear to be the parents of someone else in my genealogical family, which meant I needed to take another look at who she was and if she had a connection to me? I brought up Litha's Dawes jacket and found an interesting statement that could not be overlooked or mistaken (in my humble opinion.) Litha had a brother by the name of William ALEXANDER!!!

William ALEXANDER was familiar for a lot of reasons; first, he emerged as one of the leaders of the Chickasaw freedmen during the 1890's. He was also the brother of the lead litigant in the lawsuit Equity Case 7071. Not only that, I have a theory that the Choctaw and Chickasaw freedmen made a concerted effort to put their leaders at the front of the line when it came to enrolling with the Dawes Commission and William ALEXANDER was enrolled on Chickasaw Freedman card number one.

﻿
To the "untrained eye" it might not appear these two are related but it has been my experience that the family connections among freedmen are complex but simple (don't say it, I know.) They were well aware of their family members and where committed to keeping their family bonds tight. Despite the fact the information appears to conflict upon further review will reveal that these two are indeed sister and brother. In the Dawes jacket for Litha PRICE, her husband of all people makes the connection to William ALEXANDER. 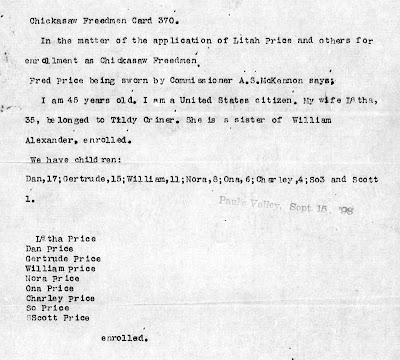 ﻿This information provides more clues about an issue I've been trying to resolve for years; why did some of Cornelius and Margaret's children use the surname ALEXANDER and not PICKENS? The fact that this information has Cornelius as an ALEXANDER and on the rear of Margaret Ann WILSON'S Dawes card it appears her father was Colbert ALEXANDER could indicate both at one time were enslaved by someone by that surname? 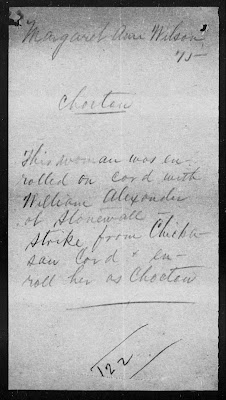 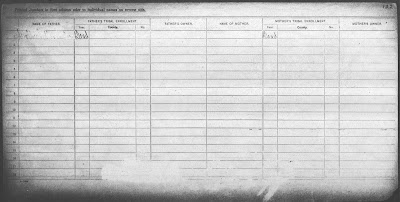 Clearly there are some issues that have to corroborated to conclude Margaret and Cornelius are the parents of Litha but what record there is, demonstrates a strong probability in favor of that conclusion.
There is one other issue that emerges as I look at the possibilities with this connection. With the possibility that Cornelius had an alias and died during the "War of the Rebellion" I continue to hold out hope he will be my first connection to the Civil War despite the fact I share no blood relationship with him. The question becomes was he involved in the United States Colored Troops as Cornelius ALEXANDER?

Japan and Lesson's To Be Learned...

As I view the damage and loss of life in Japan, the destruction of property and the loss of family I'm reminded of the importance to seriously preserve the information and photo's of my own family's history.

If something tragically should happen to me or my home, how do I protect the research and documents I've amassed over the past twenty plus years?

How do I protect the photographs that have been with us for more than one hundred years?

The tragedy in Japan is another reminder we all have a responsibility to plan for any possible incident that could destroy the history and artifacts that can be preserved for future generations.

Recently I was watching a television program on the History Channel on the Library of Congress and what they were doing to preserve America's history. They were planning for any eventuality that could destroy the invaluable collection that will tell future generations about the history of this country. An example they used was to illustrate how our culture could be lost based on the methods of how our history is preserve and the material it is store on. They compared and contrasted contemporary materials to ancient materials and concluded; future generations would know more about ancient civilizations than present civilization because the ancients carved their history in stone.

Clearly the methods we have, digital, paper and audio preservation could be at risk if there was a fire, earthquake or flood; we need strategies and we need them now!

I would like to hear any ideas others have on the preservation of family history.
Posted by Terry LIGON at 12:52 PM No comments: Links to this post

Today would be the 146th birthday of Bettie LOVE the daughter of an enslaved woman named Margaret Ann ALEXANDER in Burneyville, Indian Territory; Bettie’s father was an influential man with large land and slave holdings by the name of Robert Howard LOVE.
It was the circumstances of Bettie’s birth and thousands of men, women and children like her that challenged the system of determining a person’s race by the perceived race of their mother.

Bettie became the lead litigant in what began as a $15,000,000 (fifteen million dollar) lawsuit that sought a transfer of approximately two thousand people from the Dawes Choctaw and Chickasaw Freedmen rolls to the “citizen by blood” rolls of their respective nation. This suit became better known as “Equity Case 7071.”


This lawsuit meant more than the millions of dollars to the litigants and the three hundred and twenty acres of land they would receive if the could demonstrate they had "Choctaw or Chickasaw blood," it meant ALL of their descendants would enjoy the rights and privileges of citizenship in the nation of their ancestors birth should they choose that path.

﻿When the suit was filed it was said that Bettie stood in front of the county courthouse doors and demanded that they remain open so people who “lived in the country” could have time to sign their names to the list of complainants. Bettie with this action became one of the unsung heroes in the list of Choctaw and Chickasaw freedmen leaders in communities known as Milo, Berwyn, Newport, and Springer.

On April 13, 1907 at 2:00 PM the lawsuit that would involve ultimately more than 2,000 people, twenty million dollars and what could eventually be more than six hundred thousand acres of land became a part of Oklahoma history and American History.

This year will mark the 100th year since Equity Case 7071 was dismissed from the United States Supreme Court and was never heard on its merits because an attorney failed to print a brief and submit it to the court! It is hard to image with that much money riding on a simple question of paternity, someone failed to file a brief.

Which also means the question truly has never been answered; does the child of an Indian man, possess his blood and is that child considered to be an Indian?

There is a great deal more to tell about this story and it is my hope to write exclusively on the subject, it is a story and subject that deserves to be told!
BTW! Who is going to be my 50th & 100th subscriber? I'll have to think of something special for the occassion?????
Posted by Terry LIGON at 10:33 AM No comments: Links to this post