Entitled to Participate as an Indian by blood or a Freedman?

I would like to give some big props to another researcher by the name of Alcina LOFTIES, a Chickasaw Freedman descendant. Just the other day Alcina contacted me about a research problem she was having wanting to know if I had some suggestions to resolve the issue.

Now for the rest of the story; it seems Family Search has a collection for those of us who research Indian Territory Freedmen. This particular collection is the Oklahoma, Applications for Allotments, Five Civilized Tribes 1899-1907.

With this collection online it becomes possible to glean additional information about our ancestors that is not present in their Dawes M1301 summaries. For me there were two documents that had some very important information that I welcomed.

The first document that helped resolve an issue I had for quite some time was the date of death of my great great grandmother Margaret Ann WILSON. Margaret is enumerated in the 1900 census of Indian Territory with one of her daughters, my great grandmother Bettie LIGON. In the 1910 census for Oklahoma, Margaret is nowhere to be found and there isn't a “certificate of death” in her M1301.

Margaret is not listed in the 1910 census for Oklahoma with any of her eight children who were alive in 1900. For years I have wondered when Margaret died and I've gone as far as sending a request with money to Oklahoma hoping to obtain a death certificate. Until now I never had any luck coming up with an answer when Margaret died.

Image my surprise to locate documents in Margaret’s “application for allotment” with the information I had been seeking for several years. With this new found information I’m ecstatic to resolve a question that has eluded me for so long.

There is also additional information contained in the file that one of her daughters Lizzy Murray indicated that Margaret Ann suffered from asthma; which may have been attributed to her death. 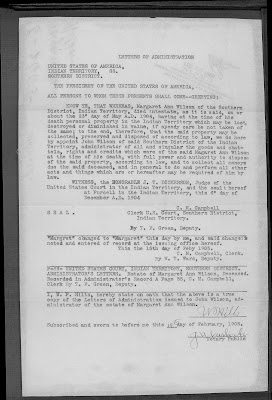 The other document discovered in this “treasure trove’ is one that provides some insight into one of Margaret’s daughter’s and my great grandmother Bettie LIGON.

My father used tell a story about his “Indian grandmother” Bettie and how she stood in front of the Carter County Courthouse in an effort to prevent the court from closing its doors. I didn’t have any information to confirm or deny his story but when I saw the cover of Equity Case 7071 it did seem feasible there was some merit to his story.

The lawsuit that involved approximately 1500 or more individuals seeking a transfer from the Choctaw and Chickasaw Freedman Roll to the Choctaw or Chickasaw “citizen by blood” roll. On the cover of the lawsuit the attorneys filed the case on Saturday April 13, 1907 at the Carter County Courthouse and though there was nothing in the complaint that indicated people were signing up “for their land” as my father put it; I came away from the story thinking that my grandmother Bettie was a determined individual which was probably why the attorneys in the case chose her to be the lead litigant. 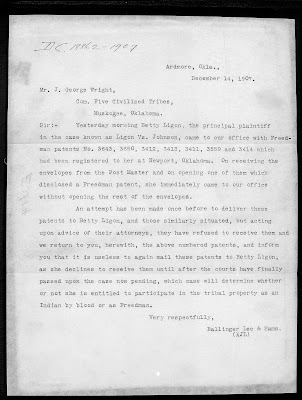 When I found the application for allotment in the case of Bettie there was a very interesting document included in the file. It seems the Dawes Commissioners and the Choctaw tribe tried at least on more than one occasion to deliver a land patent to Bettie who refused to accept it on the advice of her attorney.
Clearly the idea of refusing the allotment of forty acres of land in 1904 was a serious move on her part. Land meant wealth and livelihood for thousands of people who forty years or so earlier had just come out of slavery.

During those forty years the former slaves and their descendants scratched out a living on the communal lands within the tribes of their birth and sought to educate their children. Turning down forty acres of land was something a person did not do without some serious thought on the long term consequences.
I was truly elated to see Bettie stand on principle when she informed the Dawes Commissioners and Secretary of the Interior she would not accept the land allotted to her until a full resolution to her claim of Chickasaw ancestry and the tribe accepting her as a Chickasaw by blood.

Posted by Terry LIGON at 4:15 PM No comments: Links to this post

Chicken or the Egg?

I have been working on a database for the more than 1500 claimants on Equity Case 7071 or as I like to call it now, “Bettie’s List.” The database I’m constructing will contain many documents from various sources which include Dawes Cards M1186, the interview packets and census records. 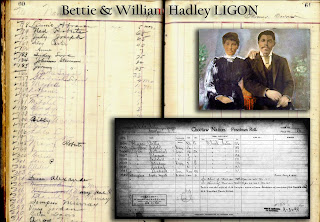 One of the census records I've been considering including in the database was the Choctaw Freedman Roll of 1898-1900 that is part of the Green McCurtain Collection. What became evident when I constructed this montage was the information that is reflected in these two documents.

First I was under the impression that the Choctaw freedmen were citizens of the Choctaw nation and therefore they were duly documented in various tribal census records since 1885.

I was also under the impression the information contained on the Dawes cards was derived from person to person interviews conducted during the Dawes Commission allotment activities from 1898 to approximately 1914 when the rolls supposedly closed.

The fact that the information regarding tribal enrollment number and the age of the enrollee on the Dawes card was supposed to be generated from an interview conducted when the “freedmen” “applied” for their forty acre allotment?

Clearly if there was an interview of the enrollee the information on the front and rear of the card should be reflected and documented in a verbatim interview. I have concluded long ago the so called Dawes “Interview” jackets were essentially summaries of the interview and in the majority of cases omitted pertinent information that is reflected on the card without any reference of it in the summary.

For example, in the case of the people on Bettie’s List in practically every instance when one of these individuals indicated they had a parent (male) who was Choctaw or Chickasaw “by blood” the name appears on the rear of the card but does not appear anywhere in their interview.

As I recall the Chickasaw Nation didn't have a census for their former slaves because they did not adopt them as citizens and felt no special need to document them. However, the Choctaw Nation did adopt their former slaves and their descendants and there are at least two census records that reflect this, the 1885 and the 1898-1900 Choctaw Freedman Censuses.

It appears in this case the 1898 Census was created from the information received during the Dawes Allotment period. I would imagine the Choctaw Nation did not have a full accounting on who was a citizen in their nation when it came to the freedmen until 1898?

Posted by Terry LIGON at 8:32 AM 5 comments: Links to this post