For many years now I have wondered about the truthfulness of a story my father told me concerning the death of his father.

The oral history began by my father telling me how his father and his father's sister did not get along that well. Mitchell and Gladys had issues that lasted a lifetime. Gladys is said to have offered five dollars to a friend to kill her brother Mitchell, must have been a serious issue to say the least.

In this particular case my grandfather Mitchell evidently took great pleasure in teasing Gladys’ husband “Alf” Anderson about his artificial leg.  It appears “Alf” was not one to suffer fools and told Mitch, “if you don’t stop, I’m gonna shoot you in the ass.”

Mitchell was said to be arrogant and decided he would pull down his pants, turn around and moon Alf! I guess somebody forgot to tell Mitch to watch his back and Alf loaded Mitch's butt  with buckshot.

The story continues that Mitch was taken to a sanitarium owned by a man named Andy Hardy so he could recuperate. It turns out that this man Hardy may have had a less than stellar reputation and was believed to have murdered his first wife as the story was told by my father.

I have to point out that a lot of what my father told me happened according to him prior to 1933 when was about eight to ten years of age.  With a lot of the stories my father told tended to be second, third and possibly fourth hand hearsay.

Here is where the plot thickens! Mitchell had a friend by the name of Riley Jackson (who may have something to do with some shady quit claim land deals with Mitch, but that’s another story) who says he actually witnessed Andy Hardy murder his first wife “down in the bottom where he was doing some hunting one day. “

Evidently Riley Jackson was aware of Andy Hardy’s reputation and feared him; he was afraid to testify about what he knew in court. Riley told Mitchell what he knew while Mitch was being cared for in Hardy’s sanitarium because of the buckshot he got from his brother in-law.

According to my father’s story a one hundred dollar reward for information about the murder was being offered.  Mitch was determined to get the reward so decided he would testify in court against Andy Hardy while still in a stretcher from Hardy's sanitarium.  Mitch now fearing for his life, hastily left the sanitarium when Hardy threaten to kill him.

Mitchell was known to be a pretty good horse trainer and had a horse named Wilson he trained from a yearling. Mitch trained Wilson to swim across creeks while he rode him or held on to his saddle as the horse swam across from one side to the other.

Wilson was also known to be able to find his way home because Mitch was known to carry bootleg alcohol for sale and sometimes he would be intoxicated. One of the places that my grandfather regularly crossed with his horse Wilson was in my father’s words known as “Sawbranch.”

This is basically the story my father told me years ago; I took notes and filed it away with hopes of one day finding some material that could corroborate this family oral history. I had many questions and thought that if I had the ability to travel back to Ardmore I would search for a court record that might provide information about the murder case involving Andy Hardy. I also held out hope that I could locate a court transcript that would have the testimony of my grandfather. Since he died in 1933 I wanted to know something about his manner of speech, attitude or just a trace of some truth to this story.

Was Mitch actually shot by his brother-in-law?

Did he actually testify in this murder trial?

Was there any truth to my father’s belief his father died with a bullet in his back?

Did Andy Hardy making good on his threat to one day kill my grandfather?

Just last week I was having another online discussion with my friend and researcher Alcina Lofties about a newspaper article she located concerning the murder of my father’s half brother Luther Ligon, also the son of Mitchell. The story reminded me of this story about the Hardy murder case and I happened to mention it to Alcina.

I have learned over the years that newspapers can be a goldmine of information when you are looking for information about the communities where your ancestors lived. It was a matter of hours when I got an email from Alcina with newspaper tear sheets that provided some essential corroboration of my father’s oral history.

My cousin Clayton found our grandfather’s certificate of death that listed his cause of death as an “accidental drowning riding horse in a swollen stream.”

Although it would contradict my father’s belief that his father was shot in the back it seems to give a little credence to the story of Mitchell using his horse to cross a stream.

The newspaper clipping Alcina sent me was another reminder that we have to interview elders extensively about their knowledge of family history. My father’s oral history has now demonstrated at least three times the stories he heard as a child had a great deal of truth to them and he would be elated to see the new piece of evidence that corroborates another significant family story.

The headlines read, “Negro Drowns in Salt Branch, Mitchell Ligon Loses Life Attempting to Ford Flooded Stream.” I now have some convincing evidence on the death of my grandfather at the age of forty in 1933. Never in my wildest dreams would I have thought his death would be material for a newspaper but once I began reading the article some significant information about his death and more importantly his life emerged.

One of the first things that stuck out is how I may have misunderstood what my father said or he was mistaken in were exactly his father died.

Clearly there was a grain of truth in his story despite the difference in whether his father died in “Saw Branch” or as the paper article stated, Salt Branch.

The fact that the two words are so similar I have to again believe that much of the oral history I was told years ago may have a lot of truth in it and this article is just another document in our overall family history that illustrates the paper trail people leave that we as researchers only have to look for, or in this case have a friend looking out for you!

As I dissect the article and try to square it with the information my father provided as he told the story it is remarkable how much can be gleaned from the newspaper article about my grandfather. 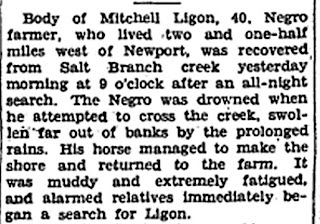 The article provides a relative time frame for the death of my grandfather after an “all-night” search after locating his body the next morning around nine o’clock.

The article mentions how my grandfather’s horse (Wilson) made it back to his farm “muddy and extremely fatigued” which “alarmed relatives” who “immediately began” a search.

It is not clear from these statements when the horse returned to the farm but it does demonstrate, again, the truth in my father’s story when he said his father’s horse was so well trained he could find his way back home, this time without my grandfather. It would appear the horse made it across the creek but his rider did not and the article explains why in the next paragraph.

Mitchell’s body was found a “mile from the crossing” and he was wearing “heavy workclothes and rubber boots” and was attributed to his inability to cross as he was accustomed to do with his horse that was trained to make the swim.

Why the authorities surmised Mitch was “believed to have been washed from his horse about 3 o’clock” is not clear and if there is a record of the investigation into his death, perhaps it might provide that answer.

I have to believe that if this crossing is as “much used” as is indicated in the article, Mitch understood the danger and if he was confident in his horse making the crossing I have to think he was smart enough to know his clothing and shoes would have been a detriment to any attempt to cross or he has done it time and again with the same clothing and boots?

It is also clear the incident happened during the day and in the next paragraph more answers and question arise about the incident.

There was an investigation and inquest into the death of my grandfather which in my mind means there may be a record or two that may provide additional information about the drowning and who was questioned about Mitchell Ligon’s death. 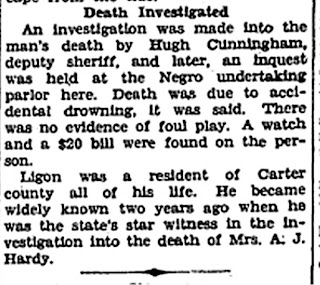 Perhaps the sheriff left a record of the investigation he conducted and it is lying somewhere in Carter County Courthouse waiting to be found.

I am not sure what record an inquest held at Ragsdale Mortuary would have been, I suspect it was the autopsy?

It is curious they mentioned a watch and a twenty dollar bill was found on his person as if that was sufficient to disprove foul play.

It is the last statement in the article that makes me recall what my father said about his father testifying about a murder and why the inquest and investigation was conducted. Mitchell was “the state’s star witness in the investigation into the death of Mrs. A. J. Hardy.”

Since the “drowning occurred in 1933 this means the “investigation” into the death of Mrs. A.J. Hardy happened in 1931. Is there a record of that investigation somewhere in Carter County’s Courthouse?

The article said “investigation” not a trial, does this mean Hardy was never charged with murdering his wife?

As the “star witness” what information did Mitchell provide and did his death actually result from an “accidental drowning” in a creek that he and others used frequently as implied in the article?

I don’t have any answers to these questions but I am grateful to have some corroboration of my father’s oral history. When I take into account the story he told me about his “Indian” grandmother, and the death of his brother Luther ALL  of which have shown to contain more truth than fiction, I am quite sure there is more information concerning my family history to learn and it demonstrates the power of capturing oral history.
Posted by Terry LIGON at 5:20 PM 2 comments: Links to this post