Milo, Indian Territory-Tell Your Story or Someone Will Tell It For You

I was looking through some newspaper articles that had the name of some communities my ancestors lived in prior to statehood in hopes of finding information about the area they received their land allotments.

While going through articles in the Daily Ardmoreite I came across this article about a man named J.W. Johnson and how as a young man he came to Indian Territory with fifty cents in his pocket and became a very wealthy and successful businessman.

The article did not provide information on why he came to Indian Territory after leaving Pennsylvania at the age of twenty but it did mention “his first work here was on the stock ranch of Williams and Murrys, at Erin Springs, on the Washita River near Kickapoo Flats.”

Mr. Johnson had other employment experiences that included working on the government mail stage line from Caddo, Choctaw Nation to Anadarko and Comanche counties, where the article stated he “met with incidents which to us of this day would seem very thrilling.”

A few years after arriving in the territory J.W. Johnson married Emily Brown in 1886 she was the daughter of Hepsie Brown of Old Mill Creek in Tishomingo County and a Chickasaw Indian. Two years later the couple moved to Milo, Carter County which was then Pickens County, Chickasaw Nation and “settled on lands which he has since taken as allotments for himself and family and where he now resides.”

It is at this point the article seems to contradict itself because it further states, “at the time of his arrival at this place, there was no town of Milo: the land was comparatively wild and in its primitive state.” Perhaps I misunderstood the earlier statement that indicated the Johnson’s “moved to Milo, which was in Pickens County, Chickasaw Nation” In the next paragraph the article states: “the principal population of this part of the country at the time was the Indian, the illiterate negro, the whiskey peddler and the outlaw who made this part of the country his rendezvous.” 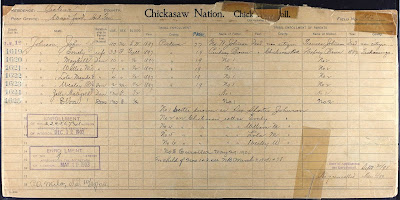 For the life of me, the history of freedmen in the Chickasaw and Choctaw nations glosses over the institution of chattel slavery and the presence of the formerly enslaved and their descendants. It also goes to great lengths to illustrate the lack of educational opportunities the former slaves had for their children and implies a certain ignorance that continues a theme of superiority that whites coming into the territory had towards the people who were there long before their arrival similar to J.W. Johnson.

According to the article Johnson established the post office and town of Milo and was the postmaster for the fifteen years prior to the date of the article. Just doing the math it would seem that within the ten years prior to the Dawes Commission allotment, J.W. Johnson established the town and post office of Milo, Indian Territory

The articles continues by identifying Johnson’s family that were entitled to land allotments based on his wife Emily being a “recognized” Chickasaw citizen. This very "successful" man was the head of a family that acquired three-hundred and twenty acres of land for his wife and their eight children “the total amount of this land for himself and family is three thousand two hundred acres, on which he now has fifteen dwelling houses besides his elegant private residence, an up to date cotton gin, grist mill and a nice store.”

I thought the statement in the article “many an eastern farmer longs for one-half of the blessings enjoyed by this man” to be missing the point that there were many people in the area that Mr. Johnson considered “illiterate negroes” that should have had the same opportunity he had but were denied because of the stain of slavery.

There were more than one-thousand five hundred individuals who should have been provided the same three-hundred and twenty acres of land in the same area that he “founded” the town of Milo. The thousands of people who were enslaved by Chickasaw Indians were not welcomed as J. W. Johnson and despite his statement that “come to Carter County and partake of these blessings with us. Civilization has taken the place of lawlessness and plunder.”

Well that is a debatable subject and clearly does not take into account of the manner in which Johnson was able to obtain a large amount of land that was denied people who were there before he arrived, lived among the Chickasaw’s before he arrived and remained on the land for him to come in and claim to establish a town were wild animals and illiterate negroes had been long before he brought his brand of civilization to the area.

To get a full understanding of the effect of what the area looked like I thought I would look at some census records to enlightened me on who among the freedmen lived in the area and how they may have been tied to the Chickasaw nation and found some very surprising results.

Beginning with the 1900 census I wanted to see just who lived in the same census tract that the Johnson family resided so my first task was to locate this family and the surrounding community in which they lived. 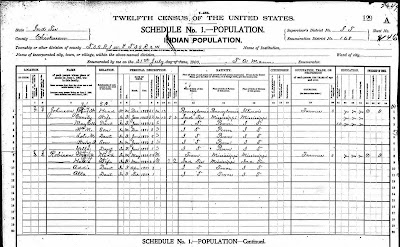 Because of my research I am well acquainted with that township and range as well as the enumeration district because many of the families I research live in that community. So you might excuse me if I don’t buy the idea that the area was wild and uncivilized before the arrival of J.W. Johnson and men like him.

Freedmen and their families were a vital part to this community and no doubt added money to the wealth of this man as they navigated their way in the territory a good twenty years before he arrived. Families like Jackson, Abram, Nero, Taylor, and Ligon all have homesteads in Township 3 South, Range 1 West and it is the height of arrogance to ignore their presence in this area. 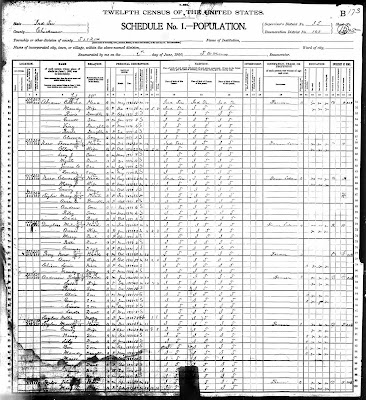 I write this article to demonstrate just how important it is that Indian Territory Freedmen preserve and tell their family’s story and the story of their community. I can’t say John J.W. “Six Shooter Johnson" was a bad man but articles like the one written about him that diminish the contributions our ancestors had on Indian Territory and the state of Oklahoma. It also diminishes the atrocities visited upon our ancestors that prevented them from amassing the land and wealth that was afforded a man from Pennsylvania with fifty cents in his pocket?

There is much more that can be said about the people of Milo, Indian Territory especially the men, women and children who came west on the Trail of Tears with the Chickasaw and Choctaw Indians. The men, women and children that survived the indignity of bondage and later denied their very heritage of sons and daughters of Chickasaw Indians were not provided the same dignity that was shown J.W. Johnson who went on to be considered a pillar in the community of Milo, Indian Territory and the state of Oklahoma. 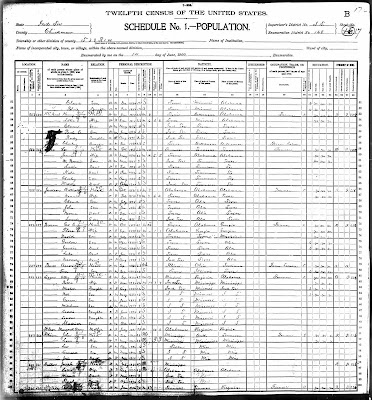 Posted by Terry LIGON at 4:30 PM No comments: Links to this post